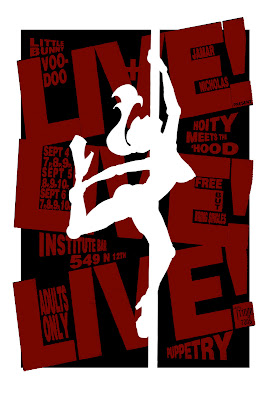 Hey gang! Here's more press on the event I'm putting in on next week. There's a new poster that may be a little suggestive, but it's puppets, so Caveat Emptor.

From this weeks CITY PAPER:
LIVE! LIVE! LIVE! Hoity Meets the 'Hood
LIVE! LIVE! LIVE! Hoity Meets the 'Hood teams the urban puppeteers at Little Bunny Voodoo and hip-hop cartoonist Jamar Nicholas. We know LBV's 2007 Fringe offering, Late Night at the Tiki Bar, was a visual delight. To quote CP's review: "We could watch these puppets watch paint dry," and we've been following Nicholas' street-smart hip-hop comix for years. The concept here is a "design mashup" with LBV's Alisa Sickora Kleckner and husband Chris Kleckner working with Nicholas to bring his creations to life. "They took my half of the project and really gave my ideas wings," says Nicholas. --Brian Howard

read Puppets at the FRINGE: on WHYY

They interviewed me as well, but they TOTALLY LEFT MY WHOLE PART OUT. :pout:

Anyway, it's coming, and there's nothing you can do about it. If you're in Philly, come check it out. It NEEDS to be seen live.
at Friday, August 29, 2008

Email ThisBlogThis!Share to TwitterShare to FacebookShare to Pinterest
Labels: 3 and to the 4 then you gotta BREATHE, A.B.C. (Another Bag Creation), DIY, G.L.O. (Good Lookin' Out), Gallery Rays POWERFUL, Gettin' Ink, Jamar Press', Publicity Stuntin', The Re-Up